By the mid Seventies, Navvie Brick, as I was then called (and there lies a story in itself), was already known in Nottingham as the agitprop street cartoonist whose provocative gags and comic strips appeared in Nottingham Voice (the ‘alternative’ local paper published out of The People’s Centre, Mansfield Road), various union publications and leaflets, and a stream of community pamphlets and fliers pushed out by inner-city community groups. Looking back, my cartoons were pretty basic and extremely angry, but these were the beginnings of Thatcher’s war on the working class and I was learning the skills of writing and drawing on the hoof. Despite that, readers seemed to like my crude little rages against the machine and I was always busy, always broke.

I was never going to make a living out of agitprop, but then a woman called Angie turned up on my doorstep and offered me a job as a ‘community artist’. She explained she was the Secretary of a fledgeling Arts and Crafts Centre starting up in the old Hyson Green Dispensary and, no, she hadn’t a clue what a community artist was, she was just the messenger. I accepted the offer (I needed an income) and joined a disparate rabble of what might be described as ‘alternative arty and crafties’, who also hadn’t a clue what a community artist was. None of us were particularly experienced in the fields we were offered employment in, including the extremely enterprising Glen Broughton, the driving force behind the concept and the acquiring of grants, and the state of the building we occupied rather mirrored that.

To the general public, who stayed away in droves, it looked like we had squatted a derelict Edwardian washhouse stripped of washtubs but replete with smashed windows, piles of broken bricks and wall tiles, and furniture salvaged from skips, which actually wasn’t far from the reality. Most particularly, there was no heating system and I have vivid winter memories of us all huddling around a rented commercial blow heater that barely melted the frost that sparkled in corners and certainly didn’t quell our shivers, arguing about just what we thought the species ‘Community Artist’ is. The bitter irony here was that several years before the place was reoccupied, when I made my money as a scrapman, myself and a tatter called Scouse had broken in, ripped out the piping and boiler, and weighed in the cast metal of said heating system!

Two community artists were employed, the other being Ray Richards, a performance artist whose claim to infamy was receiving an Arts Council grant to walk around the Peak District behind two colleagues with a long pole strapped to their heads. I at least had a wealth of contacts in the area’s community groups and on the street, and could now offer my services as an illustrator-cartoonist to campaigns (of which there were many in the Seventies, particularly related to housing issues) without them feeling bad about not being able to pay me.

Community arts were a very different barrel of loaves and fishes in those nascent days. Ray and I decided the last place we should be was in ‘The Building’, as the Dispensary became known. We felt we should be pounding the pavements, talking to residents and shopkeepers in Forest Fields and Hyson Green, trying to solicit some idea as to what we might do with and for the community. If memory serves, the dominant theme that emerged was just how goddamn ugly and soulless the fabric of these neighbourhoods were, most particularly the complex of flats known as ‘Alcatraz’ where Asda now stands. We divided the hinterland between us, Ray taking on the flats while I adopted Forest Fields (where I lived) and everywhere else on the Green that wasn’t the flats. And what we did was paint murals, planned, designed and executed with the locals who would have to live with the results.

By today’s standards, it sounds extremely lightweight and ad hoc, but it has to be borne in mind that the co-opting of community movements and social control of neighbourhoods by the state was very much in its infancy before the riots of 1981. Initiatives like adventure playgrounds, food and housing co-ops, and the Claimants Union were the product of either proactive neighbours from a street or block, or from formally constituted tenants and residents groups. Community workers, the new-fangled social workers, were distrusted and, in the case of certain individuals who went on to become MPs, despised. Ray and I worked hard to make sure none of that understandable antipathy to officialdom rubbed off on us, the community artists, and to insulate ourselves further, we came up with the idea of a festival called Hyson Green Takes Off.

Staged on the Forest Recreation Ground, Hyson Green Takes Off was more village fête than urban rock festival, though there was a strong live music content. Thanks to a lot of hard work by community groups, the Arts and Crafts Centre, local schools and traders, and a couple of sympathetic councillors, the inner city fête was a repeated success. It laid the foundations for Rock and Reggae, the music festival that seems to possess near legendary status for many in Nottingham. It amuses me how many people I meet who boldly claim to have been one the original organisers, and how many long-standing couples I know who first met at those Forest festivals. Truth be told, Rock and Reggae was started by local residents Mark Harrison, Tony (for the first year) and Dwight Harris from the Afro Caribbean community, and myself in response to the institutionalised racism and excessive use of the SUS law that would eventually trigger the riots. We saw R&R as Nottingham’s version of Rock Against Racism, which had become a powerful expression of anti-racism by the late 1970s, and the title came from a drawing I produced for an early poster featuring the head and shoulders of John Lennon and Bob Marley facing each other. We focused on the music (black, white and to a much lesser extent Asian) more than the RAR connection because, back then, popular music said it all about young people’s revulsion to Thatcherism. Think of The Specials’ Ghost Town.

The Arts and Crafts Centre played a pivotal role in the success of Rock and Reggae, but what it stood for inspired a small army of helpers, contributors, backers, lenders and ground staff without whom it would never have happened year on year. At its height it ran for a long weekend, starting Friday night with serial parties, then 11:00am to midnight Saturday and Sunday, with a gig by a named band like The Teardrop Explodes at a club in town on Saturday night.

By the early Eighties I had signed up for the Tory’s Enterprise Allowance Scheme and moved on, taking the festival with me. Dwight Harris and myself ran it with Mark Harrison and later Jennie Fleming (when Mark left Nottingham) for ten years, until we felt its message had become redundant and the music scene in Nottingham become moribund. ‘The Building’ was renovated, matured, and became well equipped with printing, photography and crafts equipment, along with knowledgeable staff. It basically got its act together as a community arts centre, but it would be fair to say it never really enticed a demographic representative of the local community to cross its threshold and become involved during my time there.

One final annual Arts and Crafts innovation is worth mentioning, in the form of Bonfire Night on the Forest. These days it is a big corporate and corporation event that attracts people from across the city, but it started as a way of disposing of all the rubbish The Building and local community generated. There were no fireworks to speak of, catering was down to a few foil-wrapped baked potatoes dragged from the ashes and, had they been anything like today’s lot, Health and Safety would have had palpitations. But there was no Guy Fawkes topping the unstable pile of flotsam and jetsam. Instead, every year I work for them, the Arts and Crafts Centre produced a really mean paper mâché caricature of our beloved Margaret Thatcher.

Get forty treats straight to your inbox! 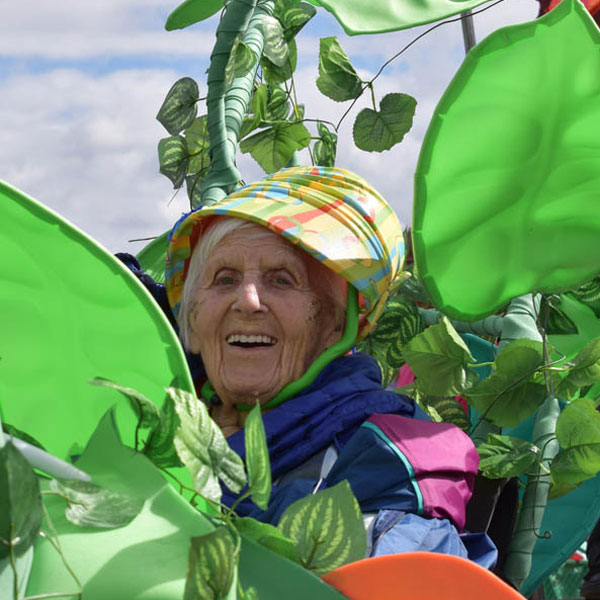 We need you to help make our next forty years as brilliant, ambitious and inspiring as the last! Dig deep and donate as much as you can afford so we can continue making life changing art!